Lucas Richman and the Knoxville Symphony Orchestra invite you to World's Fair Park on July 4th to celebrate Independence Day. Sponsored by Pilot Flying J and presented in conjunction with the City of Knoxville and WBIR-TV, the KSO is thrilled to return to the lawn on World's Fair Park for the 30th anniversary of this performance.  Both the concert and the fireworks display will be live broadcast on WBIR-TV Channel 10.

This concert is FREE & open to the public;
no tickets are required.

Musical selections include “America the Beautiful,” “Star Spangled Banner,” “1812 Overture” and “Rocky Top," plus more patriotic tunes featuring solos by Christopher Sanders, baritone and KSO Concertmaster Gabriel Lefkowitz, violin.
Audience members who tweet to @knoxsymphony during the concert for a chance to win a FREE PAIR OF TICKETS to a 2014-15 Masterworks concert next season! Use the hashtag #KSOJuly4 to join the conversation. 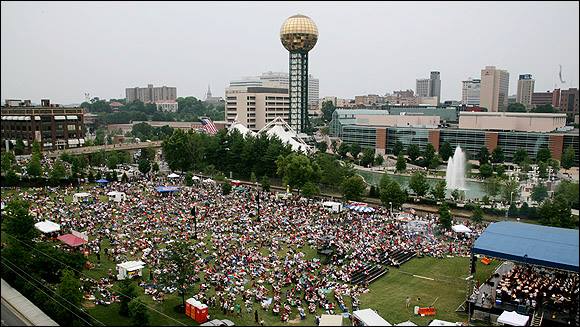