Knoxville, TN - An ordinary rainy afternoon in 1950s South Africa turns into a profound and life-changing experience for young, white Harold and his beloved black servants.  One of the most powerful coming-of-age plays ever written, Athol Fugard’s “Master Harold”…and the boys will play in the Clarence Brown Theatre’s Carousel Theatre February 5-22, 2015.  An Open Captioned performance will take place on Sunday, February 8 at 2:00 pm. A talkback will take place following the February 15 matinee. Free and convenient parking is available in the McClung Tower Garage on Volunteer Boulevard. The production contains adult language and partial nudity. Sponsored by the Knox County Tourism Consortium, the Knoxville News Sentinel, WUOT and WUTK, this Tony Award winning masterpiece continues to be timely, compelling and very moving.

Of all Fugard’s plays, none is more personal than “Master Harold”…and the boys because it relates to a boyhood incident which involved Fugard and haunted him for years until he tried to atone by writing the play.  Rather than a simple retelling of an incident from his past, Fugard’s play presented a personal experience that extended to universal humanity. More than a play against apartheid, it is about human relationships that are put to the test by societal and personal forces.

Although the play was banned by the South African government, it went on to play 344 performances on Broadway and was produced in other major cities including London.  It earned the Drama Desk Award and Critics Circle Award for best play in 1983 and London’s Evening Standard Award in 1984.  Considered to be a vital work valued for its universal themes, humanity and skilled theater craft, the play also has earned a place in contemporary world drama, enjoying frequent revivals around the world.

“I’m very excited to be directing this production.  It’s a beautiful play with so much heart. And, the Carousel Theatre is the perfect venue for it because that space is so intimate,” said Director Jayne Morgan.

Jayne Morgan (Director) is a UT alumna who has worked and lived all over - including NYC and LA.  Her CBT acting credits include Hank Williams: Lost Highway, On The Razzle, Sweeney Todd, Arsenic and Old Lace, Lost In Yonkers and Dancing at Lughnasa. She has appeared in the films Big Fish, Our Very Own, and Other Voices, Other Rooms,among others. She has directed productions at Maryville College, Webb School and Flying Anvil Theatre which she co-founded. Local audiences might also be familiar with her satirical local revue called Forbidden Knoxville. She also is a teacher and film casting director.

Rico Bruce Wade (Sam) is a visiting guest artist from Chicago whose recent work includes the IXION Ensemble production of Topdog/Underdog, the Farmers Alley Theatre’s production of The Whipping Man, and the CAP production of Fences. He also had award winning roles in the Williamston Theatre production of Blue Door and the 435 Productions film American Terrorist. He worked extensively with the Second City-Detroit.  When he’s not acting, Rico teaches improvisation with the Detroit Creativity Project.

Bryant Bentley (Willie) is a native of Dayton, Ohio who now resides in Columbus, Ohio. A professional actor for more than 15 years, he has performed in regional theatres throughout the country. He's been nominated numerous times for his performances including Best Actor, Tampa Bay Theater Awards, Winner of the Theater Roundtable awards for Best Actor  for his betrayal of Boy Willie in August Wilson's The Piano Lesson, CATCO Theater, and Winner of the 2013 Theater Roundtable Award for Best Actor in Matthew Lopez's The Whipping Man, New Players Theater, Columbus Ohio. He also has done numerous commercials and films.

Eric Ervin Sorrels (Hally) is a senior Honors Theatre major from Lebanon, TN. He also studied acting and musical theatre last summer at Circle in the Square Theatre School in New York City.   Past CBT credits include A Christmas Carol and Spamalot.

With a dual mission to train the next generation of theatre artists and to provide top quality professional theatre, like that of a teaching hospital, the Clarence Brown Theatre at the University of Tennessee Knoxville is one of only 12 academic LORT (League of Resident Theatre) institutions in the nation.  Under the leadership of Producing Artistic Director Calvin MacLean and Managing Director David B. Byrd, the CBT season runs from August through May and features eight productions ranging from musicals to drama.

Productions remaining in the 2014-2015 Season include: “A Midsummer Night’s Dream,” “A Shayna Maidel,” and “The Threepenny Opera.” 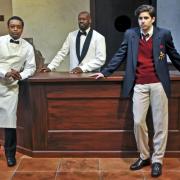